“Jahan-e-Tahqeeq” is HEC Recognized, open-access, peer-reviewed, and refereed trilingual journal. The Journal strives to publish high-quality research in the domain of Arts and Humanities specifically on various languages across the globe. The journal aims to provide opportunities to those scholars and researchers, who are working on different languages.  The Journal publishes only those articles, which are based on original research and have not been previously published elsewhere. 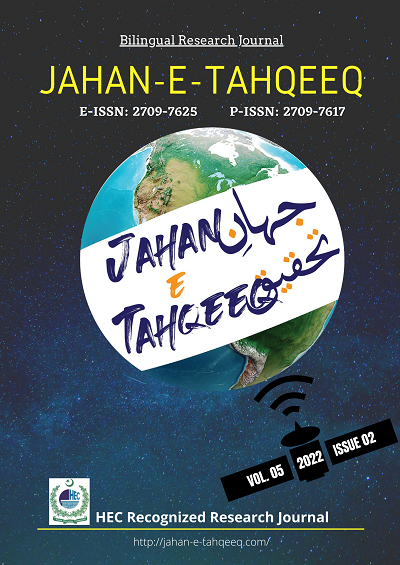 Islam has urged humankind on taking protective measures from diseases and epidemics. It considered the precautionary steps better before the occurrence of diseases and has endorsed modern preventive medicine which is a set of teachings and instructions practiced to protect humans from communicable, imported diseases and spread of infection before they occur. In the past, the Arabs used to say in the form of their famous proverbs: “See the doctor before you get sick” “An ounce of prevention is better than a pound of cure”, “Prevention is better than cure” and as said by The famous Arab physician Harith bin Kalda: “Diet is the head of medicine, and the stomach is the home of disease, and return everybody to what it is accustomed to”.

If someone ponders over the Prophetic Sunnah will find a large number of hadiths urging people to take a diet before the occurrence of disease and the spread of epidemics. And from that, the Prophet (PBUH) commanded to flee from the leper, and forbid to enter the land of the plague, and urged to pay attention to purity and cleanliness, and to adhere to certain standards in food, drink, sleep, wakefulness. And urged to control the animals that carry the infection, and Prohibition of adultery and other sexual perversions. In fact, our Prophet (PBUH) was the founder of the basis of quarantine (which is to isolate the sick from the healthy) when he said: “A nurse is not mentioned in a sanatorium”. All of these directives are measures that help protect people from diseases and epidemics, and also help them in treatment after falling as well.

Due to the importance of this topic, particularly the Corona pandemic, I have tried to collect prophetic hadiths in this regard, focusing on their authenticity, mentioning the inferred prophetic remedies, highlighting the scientific discoveries that were in agreement with the Sunnah more than a thousand and four hundred years ago!

This work is licensed under a Creative Commons Attribution-NonCommercial-NoDerivatives 4.0 International License.